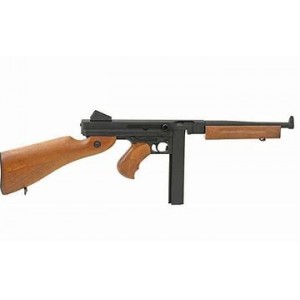 KEY FEATURES:  - Around 300 Fps On 0.20's - 420 Round Magazine - Full Metal Body - Perfect 1:1 Scale! - Skirmish Grade AEG SKIRMISH GRADE WEAPON - IDEAL FOR FIELD OR CQB DESCRIPTION:  The Thompson SMG, also fondly known as the "Tommy Gun" is one of the most iconic  weapons from the WWII era, and as such is a go-to weapon for anyone looking to make a WWII style allied load out; This also makes a great weapon for someone looking for  something a little "Different" - i.e., this allows you to stand out from the crowd of M4's or AK's and gives you that little extra "Wow Factor".  The Thompson was designed in 1918, and was used by both the law enforcement and the  Mob, The weapon originally came into being by what was, essentially, an accident - The designer (John T Thompson) had originally planned to make a semi-automatic rifle to replace the Bolt-Action service rifles that were standard issue at that time, Thompson found financial backing and started the Auto Ordinance Company; it was from here that they discovered that the system originally intended to work as a locked breach worked as a delayed blowback action!  Thompson then decided he would create a "trench broom" to allow a soldier to carry what was in essence, a smaller version of the mounted machine guns of the day - Thus, the Thompson SMG was created! CYMA have done a truly fantastic job in recreating this weapon in airsoft, As you may have heard - CYMA is vastly taking over the market for mid-price AK-Style AEG's and have started  to branch out into other weapon types, This being one of them!  The build quality of this weapon is just incredible, the body is secured perfectly and all joins are really VERY well done, the stock is fixed to the receiver perfectly and does not wobble at all; this is a bonus as this is where the battery goes; meaning wobble leading to a stock coming off mid game would NOT be good! The front handguard is held to the rifle extremely securely and  also has no wobble at all, making this an ideal weapon to run around with when used in a scout role - there will be no worries about anything  shaking loose!  Being the military version of the rifle, the bolt is positioned on the Right side of the receiver and  can be moved back and forth (however it serves no real purpose) The iron sights on the rifle are  of a very nice quality and actually allow for some very accurate shooting - this weapon's safety  and fire select are two separate levers - meaning unless you are familiar with the Thompson, it would be very wise to read the manual before you start shooting!  STATISTICS: Scale: 1:1  Magazine: 420 Round Mag (Drum Is Available) Measured velocity:  Up To 320/328Fps (Site-Safe!) Hop-Up: Fully Adjustable Fire mode: AEG Barrel type: Metal  Length: 803mm Weight: 3040g


Your Review: Note: HTML is not translated!

Enter the code in the box below: